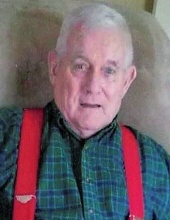 Benton Martin, 86, resident of Lewisburg, died on Sunday, January 26, 2020 at his residence surrounded by his family.

Funeral services will be conducted on Wednesday, January 29th at 10:00 A.M. at Bills-McGaugh & Hamilton Funeral Home with Pastor Ronnie Johnson officiating. Burial will take place at 12:30 P.M. at Sparkman Cemetery in Williamson County. The family will visit with friends on Tuesday, January 28th from 4:00 – 8:00 P.M. at Bills-McGaugh & Hamilton Funeral Home.

A Williamson County native, he was born on January 21, 1934 to the late Jessee W. Martin and the late Grace Marlin Martin. Benton served in the US Army, and enjoyed farming. Benton was a member of the Nazarene faith.

Bills-McGaugh & Hamilton Funeral Home is assisting the family with arrangements. Memories may be shared online at www.billsmcgaugh.com
To order memorial trees in memory of Benton Martin, please visit our tree store.