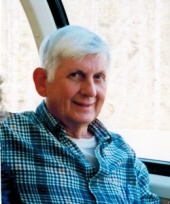 Ben Whitt Putman, age 74, a resident of Lewisburg, passed away on Friday, August 14, 2015 at Maury Regional Medical Center in Columbia after a long battle with cancer.

Mr. Putman was born on October 6, 1940, was a native of Lincoln County, and was the son of the late Ben Whitt Putman, Sr. and Annie Gatlin Putman. He was also preceded in death by his brother, Mickey Putman. He graduated from Lincoln County High School, received his Bachelor Degree from Middle Tennessee State University, retired after thirty-five years from the Internal Revenue Service, and was a member of First Baptist Church in Fayetteville.

Funeral services will be held Tuesday, August 18, 2015 at 11 AM from the Chapel of Bills-McGaugh Funeral Home with Bro. Van Johnson and Mark Pierce officiating. Burial will follow at Old Orchard Cemetery in Petersburg.
Visitation with the family will be Monday, August 17, 2015 from 5 PM until 8 PM, and again on Tuesday, beginning at 10 AM until the funeral hour.

Bills-McGaugh Funeral Home & Crematory is in charge of the arrangements.
To order memorial trees in memory of Ben Putman, please visit our tree store.