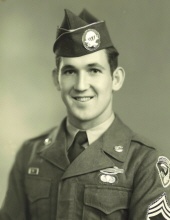 On March 28, 2020, Arnold R. Lilly passed from this life to his heavenly home. Born July 16, 1932 in Pipestem, West Virginia. He was the 12th child of 13 born to Edward Allen Lilly and Lizzie Mae Lilly who both proceeded him in death. Surviving siblings are Charles Allen Lilly of Pipestem, West Virginia; and Drema Joy Marks who lives in Centerville, Md. Arnold was a 2 year letterman in both Football and Baseball for Hinton High School where he graduated in 1950. After practice, many times Arnold would have to hitch hike the 15 miles back home and complete his chores upon arrival.

Arnold entered the United States Army after graduation where he served in the Korean War as a paratrooper in the 187th Airborne Regimental Combat Team from 1950-53. He was always proud of his service to our country.

Upon returning home, Arnold was blessed by the marriage to his High School Sweetheart, Mary Leigh (Williams) Lilly, who survives him in death. They were married on Nov. 28, 1953. Arnold dearly loved Mary as they were together in marriage for over 66 years.

Arnold moved to Lewisburg, Tn. In 1976 where he proudly served as the Plant Manager and later General Manager of Mead Containerboard. He dearly loved the people he worked with and retired from Mead in 2000. He was a devout Christian and member of the First Baptist Church of Lewisburg. Arnold was highly involved in the Lewisburg community, serving as a City Councilman for 12 years, Babe Ruth League President, Marshall County Quarterback Club President, Lewisburg Gas Board Member, Board of Directors for Tennessee Technical Coatings, as well as being named 2001 Marshall County Senior Citizen of the Year by the Chamber of Commerce. Arnold was also a proud member of McDonald’s “Old Geezers” club. He loved his mornings at McDonalds.

Loved immensely by his Family, Arnold always loved seeing familiar faces and greeted them with a warm smile and an open hand. He will be missed by all.

Arnold will be buried in his family cemetery in Pipestem, West Virginia on Thursday, April 2nd at 1:00 p.m.Due to the Coronavirus restrictions there will be no public visitation or services here in Lewisburg currently. There will be a Memorial Service in Lewisburg at a later date. Fond memories and condolences may be extended to the family online at www.billsmcgaugh.com

“The Lord is my shepherd; I shall not want. He maketh me to lie down in green pastures: he leadeth me beside the still waters. He restoreth my soul: he leadeth me in the paths of righteousness for his name’s sake. Yea, though I walk through the valley of the shadow of death, I will fear no evil: for that art with me; thy rod and they staff they comfort me. Thou prepares a table before me in the presence of mine enemies; thou anointest my head with oil; my cup runneth over. Surely goodness and mercy shall follow me all the days of my life: and I will dwell in the house of the Lord forever.” Psalm 23.