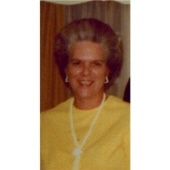 Annie Ruth Thompson McGaugh, age 83 of Lewisburg, passed away on Wednesday, June 4, 2014 in NHC Healthcare-Lewisburg. A native of Marshall County, Mrs. McGaugh was the daughter of the late Calvin David Thompson and Ida B. Church Thompson. She was also preceded in death by her husband of sixty-five years, Fred T. McGaugh, who passed away in 2013; one son, Ike McGaugh, who passed away in 1967; four brothers, Charles Edwin Thompson, James Wade Thompson, Bobby Loyd Thompson, and Billy Thompson; one sister, Mildred Watson, and a son-in-law, Mike Miller. She was retired from Russell Vending and Genesco, a member of the Eastern Star, and a member of East Commerce Baptist Church.

In lieu of flowers, please make donations to The Eastern Star in Columbia, Tennessee.

Pallbearers will be her grandchildren.

Bills-McGaugh Funeral Home & Crematory is in charge of the arrangements.
To order memorial trees in memory of Annie McGaugh, please visit our tree store.