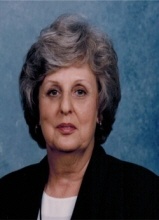 Anna Waller Endsley, age 76 of Lewisburg, passed away on Monday, September 1, 2014 at her residence. Mrs. Endsley was a native of Davidson County and was the daughter of the late Louis Waller and Ida Wages Waller. She was married to the late John Henry Endsley, who passed away in 2000. She was retired from Eraser Products where she worked as a bookkeeper, and was of the Methodist faith.

A memorial service for Mrs. Endsley will be held Thursday, September 4, 2014, at 2 PM in the Chapel of Bills-McGaugh Funeral Home with Rev. Claude McMillion officiating. Visitation with the family will be Wednesday, September 3, 2014 from 4 PM until 8 PM and again on Thursday one hour prior to the service.

Bills-McGaugh Funeral Home & Crematory is in charge of the arrangements.
To order memorial trees in memory of Anna Endsley, please visit our tree store.