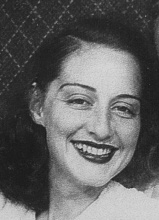 Adelaide Moore Moss, age 98, widow of Robert Henry Moss, passed away Tuesday, March 15, 2016, surrounded by her family who adored her. Born October 24, 1917, in Petersburg, Tennessee, on the Moore farm which had been in her family for eight generations, she was the daughter of the late Thomas David Moore and Lucile Shofner Moore.
She attended Peabody College in Nashville. On November 4, 1939, she married Robert Henry Moss, the love of her life, to whom she was married for 69 years before his death in 2008. She was a devoted daughter, wife, mother, grandmother, and friend admired by those who knew and loved her for her strength of character and sense of fun and impromptu adventures. She lived her life committed to serving her Lord, a positive influence for Godly principles. With her husband Bob, she created a home filled with warmth which was always open to family and friends. They were good stewards of all they had, a tribute to their growing up during the Great Depression and being members of the "Greatest Generation."
She was a dedicated member of First Presbyterian Church, Florence, and served as president of the Women of the Church, Circle leader, Sunday school teacher, and was the church visitor for seventeen years visiting all there Florence hospitals each week. She was honored with a life membership in Presbyterian Women by the women of the church for her many years of service and leadership. She was a member of the Dogwood Garden Club and the Florence Literary Club.
She and her husband managed her family farm in Tennessee and enjoyed many years of reunions with family there. Her faith, cheerful nature, her common sense view of life with personal responsibility set an example that has been a source of strength and guidance for her children and grandchildren.
She was preceded in death by her parents, her husband, and her sister, Hilda Moore Gray. She is survived by her daughter, Carolyn Wolfe and her husband, Joe, of Murrells Inlet; two sons, Robert Henry Moss and his wife, JoAnn, of Columbia, and Dr. Joseph David Moss and his wife, Kristen, of Florence; grandchildren, Andy and Curry Moss, Les Wolfe and his wife, Anne Pinckney Steele Wolfe, Bryan, Sarah, Marianna, and Rachel Moss, and great-grandchildren, Layton, Hayes, and Colby Moss, Grayson and Halen Moss, and Chappel Wolfe.
The family will receive friends on Thursday, March 17, 2016, from 6:00 to 8:00 p.m., in the Lawson-Raine Chapel at First Presbyterian Church. There will be a graveside service on Saturday, March 19, at 2:00 p.m. at Old Orchard Cemetery, Petersburg, Tennessee.
In lieu of flowers, memorials may be made to First Presbyterian Church, 700 Park Avenue, Florence, SC 29501, or to the charity of ones choice. The family wishes to thank the compassionate staff of Heritage Home of Florence for the excellent care given to Mrs. Moss.
Notes of condolences maybe sent to www.billsmcgaugh.com.
Bills McGaugh Funeral Home and Crematory in charge of local arrangements.