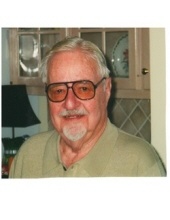 William Frances Brock Jr. lovingly referred to as "Uncle Bill" died November 28, 2012 at the age of 91. He resided at Adams Place Assisted Living in Murfreesboro for the past 10 months.
Mr. Brock was born October 8, 1921 in Mt. Airy, North Carolina. He was preceded in death by his parents: Mrs. Mary Hollingsworth Brock and Mr. William Frances Brock and sister Mary Jane Brock.
Mr. Brock moved to Nashville with his family as a young boy. He attended Tarbox Elementary School and Hume Fogg High School. He graduated from Vanderbilt University in 1943 with a degree in Engineering and was a member of the Sigma Nu fraternity. Upon graduation he felt compelled to serve his country and joined the US Navy. He completed a four year term of duty using his engineering talents to repair ships damaged in the Pacific theatre during World War II. He then completed his service with the Navy reserves. During this period of time he used his skills to help the navy "mothball naval ships".
After serving his country he began working for the Nashville Water and Sewer Department and worked his way up to become the director of department before retiring in 1985. This job opportunity provided a very fulfilling career for Bill with lots of changes in Nashville taking place during his tenure.
Mr. Brock courted a Tally Station, Tennessee farm gal for many years. He met her while attending Vanderbilt as she was a student at Peabody College. They courted for many years before tying the knot in 1976. Gracie Mae Conrad was the love of his life. They loved to travel and they both enjoyed life to its fullest until her untimely death 24 years later in 1987.
Mr. Brock was a devoted Vanderbilt supporter and had season basketball and football tickets for many years. His favorite colors were black and gold and did not like the color orange. He had a great sense of
humor and always was willing to share his outlook on life. He loved a great cigar and a little "Jack".
He is survived by his nieces Mary Richardson (Bob Richardson) Murfreesboro, Paula Cooper (Dirk Cooper) Chattanooga and nephew Ralph Conrad, Tally Station. He is also survived by great nephews Brad Richardson, Jay Richardson, Chris Cooper and a great niece, Elizabeth Cooper.
Graveside services for Mr. Brock will be conducted on Friday, November 30th at 2:00 PM at New Hope Cemetery in the Talley Station Community of Marshall County.
Visitation with the family will begin on Friday, November 30th at 12:00 PM until 1:30 PM at Bills-McGaugh Funeral Home
To order memorial trees in memory of William Brock, Jr, please visit our tree store.