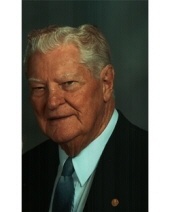 Wilburn Eugene Clark, 97 of Lewisburg, passed away on July 29, 2014 at NHC Healthcare-Oakwood. He was preceded in death by his wife of 66 years, Hazel Essary Clark in 2013; his parents, Clarence and Susie Steele Clark; and two brothers, William Ray and Frank Clark. He is survived by one sister, Virginia Clark Boatright of Lynnville, several nieces and nephews, and one very special nephew and his wife, Larry & Phyllis Boatright of Lewisburg.

Wilburn was born November 24, 1916 in Lynnville, graduated from Jones High School in 1934 where he then moved to Lewisburg and lived until 1937 at which time he joined the U.S. Navy. He retired from the Navy in 1960 with the rank of Chief Warrant Officer. He was a veteran of WWII and the Korean Wars. Mr. Clark retired after 23 years of Naval Service. He was awarded the Purple Heart Medal for injuries received in the sinking of the USS Peary in the Timor Sea battle. After retiring from the Navy, he was employed by the Federal Civil Service in Washington, D.C., and retired from this service in 1973. After his retirement, he and his wife, Hazel, moved to Lewisburg to make it their permanent home. He was a member of the First Presbyterian Church where he served as Trustee, Deacon, and Elder. Wilburn served in many more community activites which included, Mayor of Lewisburg, Chairman of the Board of the Lewisburg Community Hospital for five years, he was a 32 degree Mason and a Shriner, a member and President of the Lewisburg Rotary Club and a Paul Harris Fellow.

Condolences of sympathy may be sent to the family at www.billsmcgaugh.com.

Bills-McGaugh Funeral Home & Crematory is in charge of the arrangements.
To order memorial trees in memory of Wilburn Clark, please visit our tree store.