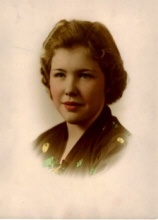 Virginia "Evelyn" Clark, age 93 of Lewisburg, passed away on Thursday, October 10, 2013, in NHC Healthcare-Lewisburg. A native of Lincoln County, Mrs. Clark was the daughter of the late William Alex Sanders and Grace Taylor Sanders . She was retired from Lewisburg Electric as an accountant, a member of the American Legion Auxiliary, and a member of First United Methodist Church of Lewisburg. In addition to her parents, she was preceded in death by her husband of forty-two years, James Lawrence Clark, who passed away in 1994, and a son, Loyd Allen Clark.

Bills-McGaugh Funeral Home & Crematory is in charge of the arrangements.
To order memorial trees in memory of Virginia Evelyn Clark, please visit our tree store.