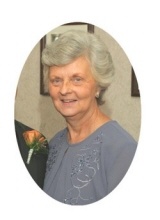 A native of Lincoln County, she was the daughter of the late Nora Glendon Young Smith and James Warren Smith. She was a retired bank teller and a member of the Petersburg Church of Christ.

She is preceded in death by her parents.

Funeral services for Mrs. Davis will be conducted on Monday, October 31, 2011 at 11:00 AM from the Petersburg Church of Christ with burial to follow in Old Orchard Cemetery in Petersburg. Bennie Burns and Larry Hames will be officiating.

In Lieu of flowers donations can be made to The Tennessee Children's Home in Spring Hill, TN, St. Jude's Children's Hospital or to the Petersburg Church of Christ.
To order memorial trees in memory of Rebecca Joy Davis, please visit our tree store.