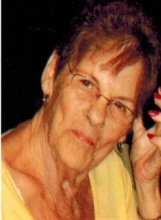 Nora "Beadie" Hargrove Rogers, age 80 of Lewisburg, passed away on Monday, July 21, 2014, at Maury Regional Medical Center in Columbia. A native of Marshall County, Mrs. Rogers was the daughter of the late Rainey B. Hargrove and Bessie Elizabeth Crowder Hargrove. She retired from Sunshine Nursing Home and was a member of the Church of Christ. In addition to her parents, she was preceded in death by a daughter, Janice Lowe, three brothers, and three sisters.

Graveside services for Mrs. Rogers will be held Wednesday, July 23, 2014, at 5 PM in Whorley Cemetery in Lewisburg.

Condolences of sympathy may be made to the family at www.billsmcgaugh.com.

Bills-McGaugh Funeral Home & Crematory is in charge of the arrangements.
To order memorial trees in memory of Nora Rogers, please visit our tree store.