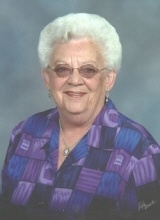 Melba Haislip Jones, age 77 of Lewisburg, passed away on Wednesday, January 18, 2012 at Williamson Medical Center in Franklin, TN. Mrs. Jones was a native of Marshall County, TN and the daughter of the late Clifford and Louise Haislip. In addition to her parents, she was preceded in death by her husband William Ewing (Billy) Jones. She was a retired clerical secretary and a member of Mt. Moriah Baptist Church.

One son Darryl Jones and one granddaughter Morgan Michelle Jones both of Columbia, TN survive her.

Funeral services for Mrs. Jones will be Friday, January 20th, 2012 at 3:00 P.M. from the chapel of Bills-McGaugh Funeral Home with burial to follow at Lone Oak Cemetery. Visitation with the family will be Thursday, January 19th, 2012 from 4:00 P.M. to 8:00 P.M. at the funeral home.
To order memorial trees in memory of Melba Jones, please visit our tree store.