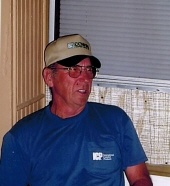 Max W. Thomason, age 74, of Lewisburg passed away Friday, April 15, 2016, at Marshall Medical Center. Mr. Thomason was the son of the late Raymond and Allie Ray Thomason and was retired from ICP Corp. in Lewisburg.
Max was preceded in death by his wife, Frances, who passed away in 2006, four brothers, A. E. "Moon" Thomason, Robert "Buddy" Thomason, Harold Thomason and Doug Thomason, and three sisters, Lois Stocstill, Ada Endsley Crutcher and Margie Fowler.
He is survived by his daughter, Sharron Ladyman of Santa Fe, a brother, Jerry Don (Charlotte) Thomason of Lewisburg, a sister, Elize Richardson of Johnson City, TN, a grandson, Brian Hazlett of Lewisburg, three great-grandchildren, Hailey, Austin and Kaleb Hazlett of Santa Fe, two step-grandchildren, Josh and Jared Ladyman and a niece Ali Blair Jones. Several other nieces and nephews also survive.
Visitation with the family will be Saturday, April 16, 2016 from 5:00 til 8:00 pm in the chapel of Bills McGaugh Funeral Home.
A Funeral Service will be held Sunday, April 17, 2016 at 2:00 pm in the chapel of Bills McGaugh Funeral Home with burial following in Blanche Cemetery in Lincoln County.
In lieu of flowers donations may be made to the Alzheimers Association, 201 West Lincoln Street, Tullahoma, TN 37388.
Notes of condolences may be sent to www.billsmcgaugh.com.
Bills-McGaugh Funeral Home and Crematiory in charge of arrangements.
To order memorial trees in memory of Max W Thomason, please visit our tree store.