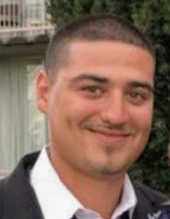 Max Villafane, age 28, passed away in Williamson County, TN on Saturday, February 24, 2018. He was born in Chicago, IL on February 10, 1990 to Edwin and Valerie Prince Villafane. Max was of the Catholic Faith, in the construction business, loved fishing, the Chicago Bears, the movie Scarface and all of his family dearly. Max was always the jokester that brought and gave smiles wherever he went. He was always the life of the party. He had the biggest heart and no matter what the situation, willing to help others.

Visitation with the family will be held in the Chapel of Bills-McGaugh & Hamilton Funeral Home from 2:30pm until 6:00pm Thursday, March 1, 2018. A Celebration of Life Service will be held in the same location immediately following the visitation at 6:00pm with Jose Kariamadam of St. John's Catholic Church officiating.

Bills-McGaugh & Hamilton is assisting the family with their arrangements.
To order memorial trees in memory of Max Villafane, please visit our tree store.