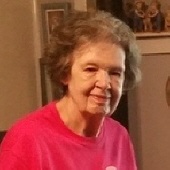 Mable Ruth Sharpe, age 81 passed away on Sunday, June 25, 2017 in Lewisburg, TN at her sons residence. She was born on November 29, 1935 to the late Robert and Ella Perryman Slaughter in Marshall County, TN. She was a retired employee of Weather Tamer.
She was preceded in death along with her parents by her husband, James T. Sharpe and a brother, Bill Slaughter. She is survived by two sons, Kerry "Marty" (Ellen) Sharpe, Lewisburg, TN, Neal Sharpe, Lewisburg, TN, a sister, Elizabeth Underwood, Nashville, TN, two grandchildren, and three great-grandchildren.
There will be no visitation prior to a Graveside Service to be held on Wednesday, June 28, 2017 at 1:00 PM in Lone Oak Cemetery, Lewisburg, TN.
Notes of condolences may be sent to www.billsmcgaugh.com.
Bills-McGaugh & Hamilton Funeral Home & Crematory is in charge of the arrangements.
To order memorial trees in memory of Mable Ruth Sharpe, please visit our tree store.