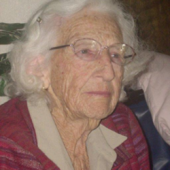 Living in Marshall County her entire life, she was born on a Cornersville farm in December 1920. Her parents were Thomas Cleophus and Flossie Claire (Luna) Holly.
She is preceded in death by an older brother Gerald Holly, a twin sister Erline Edmondson, and a younger brother Edward Holly and an infant son, Thomas Ross Turner, Jr.

Mrs. Turner was married to the late Thomas Ross Turner. In addition to being a homemaker, she ran a successful children's daycare in her home for almost 30 years. During this time she touched the lives of over 500 children in the Lewisburg community.

Survivors include two daughters, Delores (Marion) Childress of Lewisburg and Sharon (John) Houser of Bremerton, Washington, and a son, Tim (Michelle) Turner of Poulsbo, Washington. She is also survived by 7 grandchildren.

She will be greatly missed by her church family at the Hickory Heights Church of Christ.

Visitation at Bills-McGaugh Funeral Home will be held from 1-4pm on Sunday, August 14th. A graveside service at Lone Oak Cemetery will follow at 7pm.

In lieu of flowers donations can be made to the Marshall County Memorial Library. Please address any funds to the Children's Section. Mrs. Turner would often take her daycare kids there for story time.
To order memorial trees in memory of Lurline Turner, please visit our tree store.