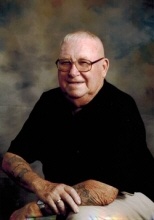 Kenneth Lloyd McCrory, age 80 of Lewisburg, passed away on Sunday, December 29, 2013, at his residence. A native of Stratford, Wisconsin, Mr. McCrory was the son of the late Neal McCrory and the late Emogene Heller McCrory. He was also preceded in death by one brother, Orin McCrory. He was retired from being a dispatcher with Norman's Truck Brokerage and a member of Farmington United Methodist Church. He was a veteran and served his country in the United States Army during the Korean War. He was a member of the American Legion of Lewisburg and the VFW.

A memorial service for Mr. McCrory will be held Friday, January 3, 2014, at 2 PM from the Chapel of Bills-McGaugh Funeral Home with Rev. Leland Carden officiating. Visitation with the family will be two hours prior to the service.

Bills-McGaugh Funeral Home & Crematory is in charge of the arrangements.
To order memorial trees in memory of Kenneth McCrory, please visit our tree store.