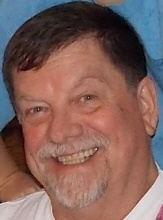 Johnny was born in Lewisburg, TN on November 6, 1945, to Carl "Rudy" and Lettie Hinds. He was an outstanding athlete and played football for Marshall County High School. He attended Lambuth College in Jackson, TN and later began a career at Nissan where he worked for 20 years. He was forced into an early retirement due to health issues. One of his favorite pastimes then became helping out in the field of dirt track racing.

Johnny shared a love of the outdoor country life with many dear friends. He passed on his love of horses to his son, Patrick Hinds, who recalls going on trail rides with his dad as a favorite memory. When Patrick and his wife Jeannie moved back to Marshall County in 2012, it was a joy for his 5 grandchildren to spend a lot more time with "Dat", as they called him. He then moved from Lewisburg to take up residence with them on their farm in Delina.

Mr. Hinds is survived by his two sisters, Linda Orr and Amelia Jernigan, two brothers, Connelly Hinds and Bill Hinds, son and daughter-in-law, Patrick and Jeannie Hinds, and their five children - Hannah, 14, Abigail, 12, Eli, 11, Clara, 4, and Naomi, 2. He is preceded in death by his father and mother.