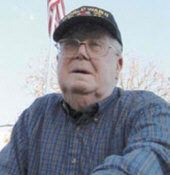 A native of Giles County, he was the son of the late Sadie Price Hargrove and John Hargrove. He was a Veteran and a former POW serving his country in the United States Army during WWII; he was retired from Faber Casteel Corporation, a farmer, and a member of the Richland Cumberland Presbyterian Church of the Springplace Community.

Funeral Services for Mr. Hargrove will be conducted on Sunday, April 29th 2012 at 2:00 PM from the chapel of Bills McGaugh Funeral Home with burial to follow in Lone Oak Cemetery with military honors. Brother Buddy Pope will be officiating.

The family will receive friends at the funeral home on Saturday, April 28th 2012 from 4:00 PM until 8:00 PM.
To order memorial trees in memory of John Hargrove, please visit our tree store.