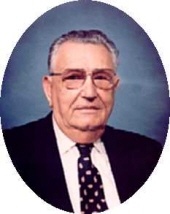 He was born in Marshall county in 1913 to Samuel 'Bud' Knowis and Mattie Phifer Knowis. He was a Past President, Vice President, and Secretary of the original Lewisburg Kiwanis Club, and a well known car salesman for Carter Chevrolet for many years.

He served the community as Councilman from 1972 until 1977, and again from June 1981 until Nov. 2000. During his years of public service, he served on the Boards of the Gas, Water, and Electric departments, the Lone Oak Cemetery Board, Planning & Zoning, and the Marshall County Memorial Library.

He was a long-time member of the Church Street Church of Christ where he taught Sunday School and served as a Deacon for 37 years.

Honorary Pallbearers will be Present & Past Elders and Deacons of the Church Street Church of Christ, Lewisburg City Employees, and Bro. Roy Beasley.

The family requests that memorial donations be made to the Church Street Church of Christ Library Fund, c/o Church St. Church of Christ, Lewisburg, TN 37091.
To order memorial trees in memory of Joe Rufus Knowis, please visit our tree store.