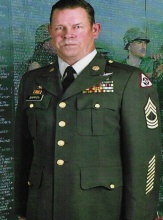 Born on November 1, 1943 in Marshall County, TN, James was the son of the late Carl & Mary Gladys Barron. James had 33 years of service with the United States Army & National Guard. He enjoyed bowling and fishing in his spare time.

Memorial contributions may be made in care of Bills-McGaugh & Hamilton for funeral expenses.