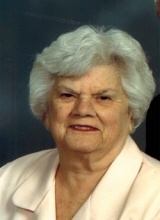 Hazel Essary Clark, age 95 of Lewisburg, Tennessee passed away on Friday, October 4, 2013, in NHC Healthcare-Oakwood in Lewisburg. She is survived by her loving and devoted husband of sixty-six years, Wilburn Eugene Clark. She was born in Hollis, Harmond County, Oklahoma.

She was preceded in death by her parents, Clive and Mary Clyde (Mills) Essary, a brother, Melvin Bert Essary, a sister, Ruth Boyette Wall, and a nephew, Charo Boyette.

She is survived by two nieces and one nephew. She is also survived by one very special nephew and his wife, Larry and Phyllis Boatright.

Following graduating from Hollis Oklahoma High School, she entered and graduated from Oklahoma University College of Nursing. After a short period of employment, she joined the United States Navy Nurse Corps. She was a veteran of World War II, The Korean War and the Vietnam War. She retired in 1969 with rank of Lieutenant Commander with twenty-nine years of service.

Following retirement from the Navy, she became active in the community of Woodbridge, Virginia. She served on the board of the Potomac Hospital and organized the Auxiliary. In 1974, she and her husband moved to Lewisburg, Tennessee. She became involved in several clubs and a member of the First Presbyterian Church. She was moderator of the Presbyterian Women and an Elder Emeritus.

Funeral services for Mrs. Clark will be Sunday, October 6, 2013, at 2:30 PM from the Chapel of Bills-McGaugh Funeral Home with Rev. Jeff Eason officiating. Burial will follow in Mars Hill Cemetery in the Cornersville, Tennessee with full military honors. Visitation with family will be Sunday, October 6, 2013, from 12 PM to 2 PM at Bills-McGaugh Funeral Home.

In lieu of flowers, the family would appreciate donations to your favorite charity.

Bills-McGaugh Funeral Home & Crematory is in charge of the arrangements.
To order memorial trees in memory of Hazel Clark, please visit our tree store.