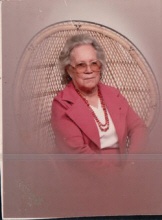 Biography
Elbirta Everhart, age 95 of Holly Grove Road, Lewisburg, TN passed away on Wednesday evening, July 25th, 2012 at her residence. A native of Gideon, Missouri, she was the daughter of the late Edward Amon Adkins and Essie Pearl Cashion Adkins. She was a homemaker and a member of the Living Word Community church. In addition to her parents, her husband Alfred Orland Everhart, two sons James and Raymond Everhart, two brothers Frank and Ralph Adkins and two sisters Virgie Adkins Hanson and Mary Adkins predeceased her.

Funeral services for Mrs. Everhart will be Saturday, July 28th, 2012 at 4:00 p.m. from the chapel of Bills-McGaugh Funeral Home with Terry Golden officiating. Burial will be in Sunset Park Mausoleum. Visitation with the family will be Friday, July 27th, 2012 from 2:00 p.m. to 8 p.m. and Saturday from 11:00 a.m. until the funeral hour at the funeral home.
To order memorial trees in memory of Elbirta Everhart, please visit our tree store.