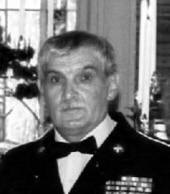 Mr. Dorris Weaver, age 80, of Lewisburg, Tennessee, died Tuesday, November 4, 2014 at his home in Lewisburg. Mr. Weaver was born in Marshall County and was a son of the late Frank Lee and Beulah Mae Phifer Weaver. He served his country as a soldier with the Tennessee Army National Guard, from which he retired in 1991, after 39 years of service. Mr. Weaver also retired in 1986 from the State of Tennessee Department of Transportation, after which he became a self-employed painter. He was a member of First Baptist Church in Lewisburg, a former member of the Lewisburg Jaycees, the Lewisburg Quarterback Club and the Tennessee Army National Guard Association. In addition to his parents, he was also preceded in death by four sisters and four brothers.

Family members will receive friends on Wednesday, November 5, 2014 from 4:00 until 8:00 p.m. at Bills-McGaugh Funeral Home in Lewisburg. Funeral services will be conducted at 2:00 p.m. on Thursday, November 6, 2014 from the chapel of Bills-McGaugh Funeral Home with Rick Rolin officiating. Burial, with full military honors, will follow in Lone Oak Cemetery in Lewisburg.