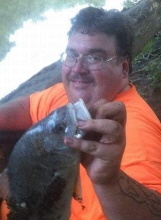 David K. Stinnett, age 44 passed away on Saturday, October 14, 2017 in the Maury Regional Medical Center of Columbia, TN. He was a native and resident of Columbia, TN born in 1973 to the late Albert J. and Linda K. Crane Stinnett.
Mr. Stinnett is survived by his fiance, Heather Jones, Columbia, TN, sister, Deborah Stinnett, Columbia, TN, aunt, Kathleen Brown, cousins, James Eric Wright, Kevin Wright, Heather Brock, Jimmy Ziegler and numerous nieces and nephews.
No services are planned at this time. A private burial will be held at a later date in Beechwood Cemetery, Cornersville, TN.
Notes of condolences may be sent to the family at www.billsmcgaugh.com.
Bills-McGaugh & Hamilton Funeral Home & Crematory is in charge of the arrangements.
To order memorial trees in memory of David K Stinnett, please visit our tree store.