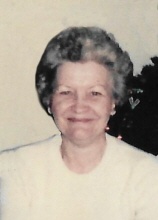 Mrs. Cooper was a native of Marshall County, the daughter of the late Oliver and Lucy Cooper. She retired from the Tennessee Walking Horse Association and worked at the Marshall County High School in administration. She enjoyed working in her yard and tending to her fish pond.

Bills-McGaugh & Hamilton Funeral Home & Crematory is assisting the family with arrangements. Condolences may be extended online at www.billsmcgaugh.com
To order memorial trees in memory of Betty Cooper Hardison, please visit our tree store.