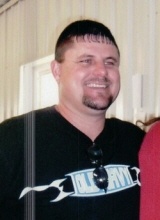 A native of Bedford County, he was the son of Mrs. Patricia Ann Chunn Rightmire and the late Jerry Wayne Brown. He was employed in construction work.

Mr. Brown is preceded in death by his father.

Funeral services for Mr. Brown will be conducted on Sunday, February 19, 2012 at 2:00 PM from the Chapel of Bills McGaugh Funeral Home with Thomas B. Sumners officiating.Mr. Brown's body will be cremated and no burial will follow.

Visitation with the family will begin on Sunday, February 19, 2012 at 12:00 PM until the funeral hour.
To order memorial trees in memory of Andy Brown, please visit our tree store.